The title of this article is a direct quote from Miko Peled, author of “The General’s Son” and a peace activist. His father ‘was a war hero turned peacemaker.’

Explanation by Miko Peled regarding the creation of the State of Israel at the expense of Palestinian Arabs in the region refers to many myths perpetrated by Zionist Jews of Israel and the United States. He shines a light on the world’s unwillingness to accept Palestinian claims, though those claims are supported by historians. Peled describes the rich life of Palestinians, but explains they had no militia to stand up to military attack and invasion. When describing Israel’s invasion and occupation of Gaza and other longstanding Arab regions, and the fact of the involuntary departure of so many Palestinian Arabs from those regions of Palestine, which the new Jewish State chose to usurp, Peled includes this statement : 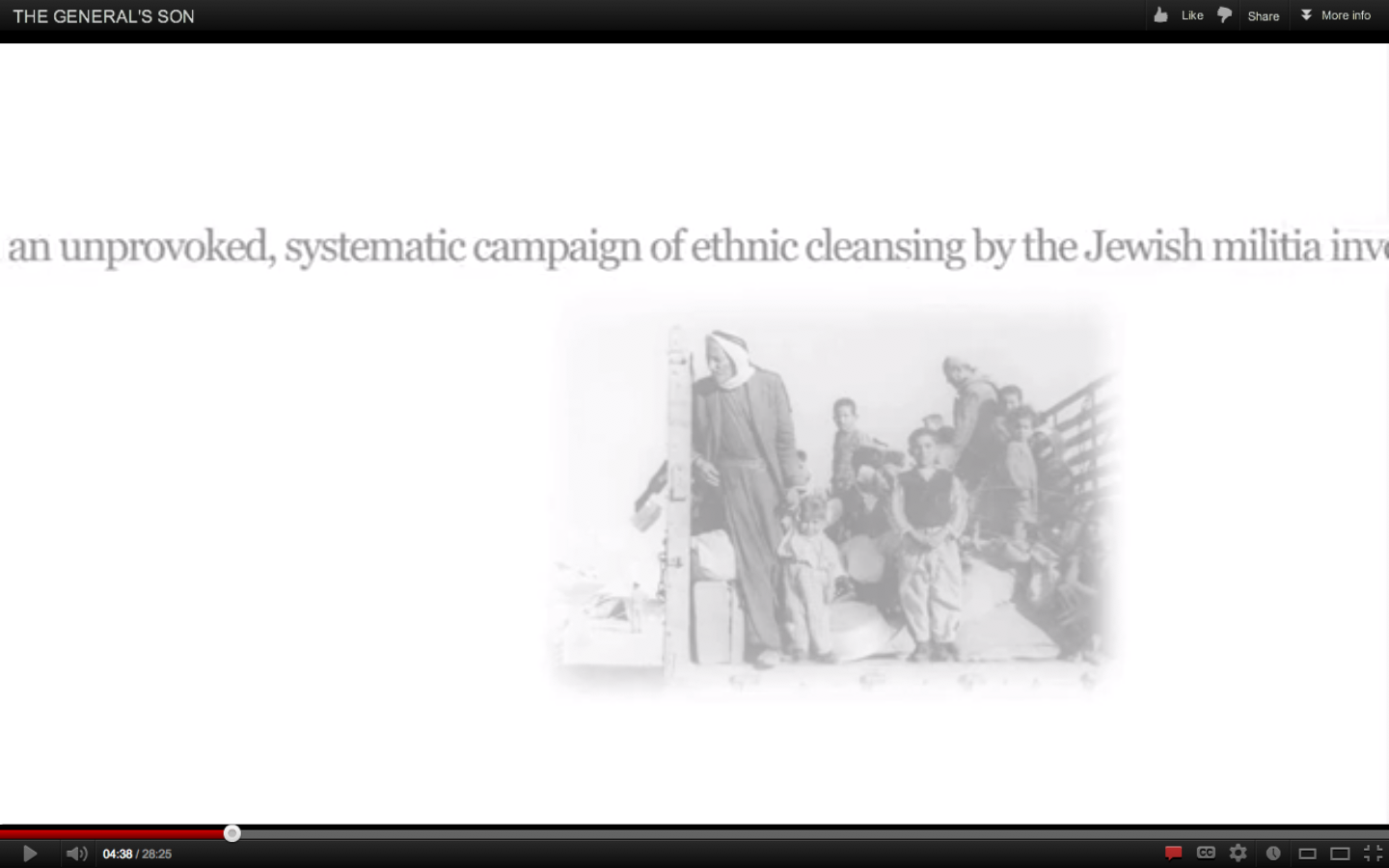 ‘…it had been an unprovoked, systematic campaign of ethnic cleansing by the Jewish militia involving massacres, terrorism, and the wholesale looting of an entire nation.’

After the pre-emptive strikes by the Israeli army had wrought destruction to Egypt (15,000 Arab casualties, while only 600 Israeli casualties, with Israel having nearly tripled it’s territory … all in six days), the generals of Israel were looking to use their enormous stockpiles of Russian made arms to further their expansion. Reading from his book, Miko Peled quotes his father’s statements made after this June, 1967 attack and crushing defeat against Egypt. General Matti Peled spoke against continued aggression against the Palestinian people in Gaza :

‘At the first weekly meeting of the General Staff after the Six Day War … when the meeting was nearing its end, my father raised his hand. He was called on, and he spoke of the unique chance the victory offered – to solve the Palestinian problem once and for all… they had a chance to offer them (Palestinians) a state of their own in the West Bank and Gaza. He claimed with certainty that holding onto the West Bank and the people who lived in it was contrary to Israel’s long-term strategy. Popular resistance to the occupation was sure to arise, and Israel’s army would be used to quell that resistance, with disastrous and demoralizing results. It would turn the Jewish state into an increasingly brutal occupying power and eventually into a bi-national state.’

Peled connects the dots of the Zionist takeover with current circumstances :

‘And this is precisely the reality in which we live today, nearly four and a half decades after that… Can we really expect that five million Palestinians will keep living under a regime that is democratic for Jews, but is brutally oppressive towards Palestinians? With about six million Jews and about five or five and a half million Palestinians living under the same rules, the same government, but with different laws… My father, who was a military expert, spent the remainder of his life, after he retired, from the military, fighting for justice for the Palestinian cause… … My father’s predictions have all come true.’

Miko Peled goes on to describe the Israeli attacks on Gaza during Jewish religious celebrations in 2008. He explains that, while Israeli had warned Palestinians of impending attacks by flying over Gaza dropping thousands of leaflets, the people had no chance of surviving these attacks :

‘I can only imagine the mother, seeing these warnings, knowing that this horror was impending but also knowing that there’s nowhere to go. There’s nowhere to run, there’s nowhere to hide, there’s nowhere to save her children from the bombs, and from the fire, from the smoke and from the chemicals, and from the phosphorus that consumes the flesh and won’t be extinguished, because Gaza is locked down. Gaza is under siege, a siege that was imposed by Israel, on the people of Gaza. So, for these young Israeli pilots … this was really nothing but shooting fish in a barrel, as they began the merciless onslaught that began at exactly 11:25 in the morning’ on 27 December 2008. And that date … will be forever etched in our memories as the darkest, and most shameful day in the long history of the Jewish people.’

Now a new date, 14 November 2012, and the days since, are vying for this title of the most shameful days in the history of the Jewish people.

While Peled doesn’t deny the truth of rockets being fired into southern Israel from Gaza, his comparisons come from personal experience and are stark. Hamas rockets create a ground crater about the size of a large soccer ball, and come usually in response to Israeli military actions against Palestinians near the border at Gaza. Children present may be scratched up from broken glass and may be in shock. The one-ton bombs dropped on civilians in Gaza can level a city block.

‘Children aren’t scratched, and they’re not in shock by that … they’re decimated. They are burned. They choke from the fumes and they are buried in the rubble.’

Later on, after telling the story of meeting with Palestinians in San Diego, California after the death, by Palestinian suicide bomber, of his niece, Peled returned home, wondering how to continue on. He makes this statement about meeting with the Palestinians :

‘It was comforting to know that we’re all very similar, and it was liberating to know that we don’t have to be enemies. But it was heart wrenchingly difficult to realize … that I did not have full possession of the truth. And that is what I think Israeli supporters, mostly Jews .. that’s where I think most of them are. And I think it’s time for Israeli Jews and American Jews to join what was very eloquently described by Clovis Maksoud as ‘the constituency of conscience.’

In a comparison many are making today, Peled recalls South Africa and The South of the United States :

‘…Y’know, one can only imagine what white South Africans went through when they saw that apartheid was coming to an end.
Clearly they wanted to hold on to their way of life, corrupt as it may’ve been. The whites in the southern states were probably trying to hold on as much as they could when they saw the end of legalized segregation and discrimination and racism come to an end in this country. … Zionists in Israel are now doing the same : trying to hold on. We see brutal tyrants everywhere these days doing the same thing : holding on, even as they fall one by one.’

He calls Zionist Israel a ‘racist regime’ and warns that we are nearing the end :

‘The Zionist dream of an ethnically homogenous state was shattered by the zionists themselves with their insatiable hunger for land. In their own hands, they created a bi-national state where almost half of the population are not Jewish or Israeli, but are Palestinian Arabs.

He goes on to predict victory by the non-violent struggle for freedom by the Palestinian people.

‘It seems surprising that Israeli soldiers, young men and women who are raised in what is seemingly a democratic society, are willing to enforce this brutal occupation… they do it very willingly, and they do it very brutally… the Zionist education system taught these young men and women that Palestinian life is worthless… For those people who do want to associate themselves with Israel and with Zionism, and drape themselves in the Zionist flag, the flag that has come to symbolize intolerance, hate, racism and brutality, they can feel free to do so. But they need to know this : that when the trials begin, and the tribunals take their place … ‘

He continues warning that the people now choosing to support the brutal Israeli Zionist agenda will, in the end, be forced to ask forgiveness, while those supporting freedom for Palestinian Arabs in Gaza and a truly democratic Israel will carry on. Peled finishes his comments :

‘The rest of us will move on and, along with the rest of the Middle East, we will follow the example of the people of Egypt to create something that will surely be a tremendous accomplishment : a democratic secular state in our shared homeland : a state where Muslims, Christians and Jews live as equals, and educate their children to love their diverse homeland with its multitude of cultures, it’s rich history, and it’s promising future.’

From the description of the video :::

Uploaded by AlternateFocus on May 21, 2011
Miko Peled is a peace activist who dares to say in public what others still choose to deny. Born in Jerusalem in 1961 into a well known Zionist family, his grandfather, Dr. Avraham Katsnelson was a Zionist leader and signer of the Israeli Declaration of Independence. His Father, Matti Peled, was a young officer in the war of 1948 and a general in the war of 1967 when Israel conquered the West Bank, Gaza, Golan Heights and Sinai.
Miko’s unlikely opinions reflect his father’s legacy. General Peled was a war hero turned peacemaker.
Miko grew up in Jerusalem, a multi-ethnic city, but had to leave Israel before he made his first Palestinian friend, the result of his participation in a dialogue group in California. He was 39.
On September 4, 1997 the beloved Smadar, 13, the daughter of Miko’s sister Nurit and her husband Rami Elhanan was killed in a suicide attack.
Peled insists that Israel/Palestine is one state—the separation wall notwithstanding, massive investment in infrastructure, towns and highways that bisect and connect settlements on the West Bank, have destroyed the possibility for a viable Palestinian state. The result, Peled says is that Israelis and Palestinians are governed by the same government but live under different sets of laws.
At the heart of Peled’s conclusion lies the realization that Israelis and Palestinians can live in peace as equals in their shared homeland.

While Israel finishes a fifth day of relentless bombings of Palestinian civilians in Gaza, all financed and supported by the United States government, many Americans continue to believe the propaganda coming out of Washington and Israel. This article will eventually be followed up with more information explaining the historical relationships among the Palestinian Arabs of Gaza and the Jews of Israel and America, and the relationship of Israel to the rest of the world, since the inception of the imperialist State of Israel. History shows the undeniable connection of the imperialist United States of America to the creation and ongoing military support of the state of Israel. The truth of the differences of opinion regarding Israeli official aggression against Palestinians, especially in Gaza, will be shown. Generally, as with the people of the United States in relation to U.S. military imperialist conquests, many Jewish people of Israel and the United States do not support these aggressive, murderous attacks on Gaza by the State of Israel.