Grief takes many forms. When young Alan Blueford was murdered by Miguel Masso in May 2012, his family, stunned by their loss, tried valiantly to follow protocol, politely asking for answers from what they would learn the hard way is one of, if not the most corrupt and violent police organizations in the country. Initial rallies, marches, and protests in reaction to this killing were tamed by pleas from the family to respect the prescribed process. Unfortunately the family learned the hard way, but in record time, about the corruption at city hall and especially within the Oakland Police organization. By now their grief is manifest in fury, and they have joined the ranks of many who have known for decades that we are governed by a process which, by definition, allows for and even actively supports the dissemination of lies and misinformation to protect police from being held accountable for their actions. While we struggle for justice, push and yell for answers, Miguel Masso is on paid vacation for having murdered Alan Blueford. They’re calling it ‘medical leave,’ as he shot himself in the foot during the shooting of young Alan. 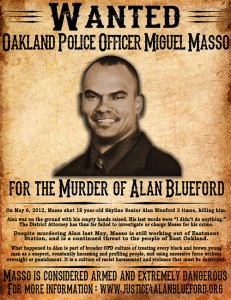 Last night at city hall, the house was packed with people come together once again to demand the truth, and demand the city hold OPD responsible for not only the heinous crime of murder, but the additional infuriating crime of lying to the public, and lying directly to Alan’s family. In the first hours after young Alan, a high school student about to graduate, was shot by Masso, the machine went into overdrive, directly informing the corporate press that Alan had shot Masso. They also claimed Alan Blueford had been brought to Highland Hospital for treatment of gunshot injuries. Never since that terrible day has the city made a public apology for having lied about that and all other details of this shooting. Evidence shows that Alan never fired a shot. Witnesses also claim he never was in possession of a weapon. The autopsy revealed that Alan Blueford had to have been lying on the ground when he was shot by Masso.

At some point in the proceedings, council president and all around arrogant tool Larry Reid stood up out of his chair, walked two seats over, and began engaging in conversation with the reviled city administrator Deanna Santana WHILE A MEMBER OF ALAN’S FAMILY WAS SPEAKING. When an attendee at the meeting called both of them out on this unbelievably disrespectful and inappropriate behavior, Reid offered to have the attendee removed from the building. Of course that was a laughable threat, as the nearly two hundred other attendees wouldn’t have allowed for such implementation of police state activity, and the protestor took the moment to inform mister Reid of the likelihood of a rumble should he choose to attempt to follow through on that threat.

Eventually, Reid called for a ten minute recess to give themselves time to request the presence of the chief of police. That ten minutes became twenty, then thirty, during which time the angry crowd loudly chanted for justice for Alan Blueford, for killer cops to be jailed, and for OPD to be held accountable. Councilmembers gave the impression they were awaiting the arrival of Coward Jordan.

When councilmembers took their seats, Ignacio de la Fuente claimed that Larry Reid was ‘outside speaking with the family.’ This blatant lie was instantly and loudly called out by many in attendance, as the family was sitting in the same seats they had occupied throughout the meeting. One person called out, ‘don’t you recognize them?’

The next order of business was so out of place in the context of the problem at hand, that the crowded room erupted in outrage the moment it was announced. Item 4.2, titled ‘International City Of Peace Declaration‘ was a slap in the face to a community of people who have been literally under the gun of a police state for decades. More recently, the truth of that description of Oakland as a police state has been documented with the illegal actions taken by OPD and the Department of Homeland Security against protestors involved with Occupy Oakland.

At about 7:30pm, Larry Reid declared ‘all right, this meeting is now adjourned for two weeks.’ The response was overwhelming disgust and anger from the crowd, vowing to return with yet another chant : ‘we’ll be back.’ As Reid departed the dais and headed for the private chambers.

Where was Coward Jordan last night? After demands were made for him to appear and explain why the family of murdered teen Alan Blueford has yet to receive even the police report from the night he was shot and killed by Oakland Police Officer Miguel Masso, Jordan never appeared. When Larry Reid ran off to hide in council’s private chambers, Jordan was spotted hiding in that back room. Since nobody saw him enter, it seems he had been there quite awhile, yet never coming to face the crowd of legitimately angry people. Hence the name Coward.

Jordan earned this name long ago, when he abruptly ended a meeting at First Acts Church in which he was supposed to be informing the Blueford family the truth about the senseless police shooting of their son. At that town hall meeting, Jordan continued manipulating the delivery of information, each new rendition of the story hanging on to the invented concept that Alan Blueford somehow deserved to be murdered by police. After having shown enormous disrespect to the community that day, the people in attendance held an impromptu rally on church grounds as Jordan and his body guards, including Chris Bolton, left the premises. OPD then arrested a protestor after he left church property, for supposedly having assaulted a police officer by yelling through a megaphone. As is their normal procedure, they held this young man for the maximum number of hours possible in the notoriously abusive Santa Rita jail, then released him without charges. He had committed no crime.

This is a story about community. The loss of another young, black son is driving the community together. The people of Oakland seem to finally be ready to forego prescribed diplomacy in favor of getting results. Last night’s meeting was an exercise in getting results. If the disruption of routine city business last night is any indicator, and the city will not deliver justice for Alan Blueford, the people of Oakland will be taking justice for Alan.

check back for video

#oakmtg #justice4alan reid threatening to have me removed for calling him and deanna santana out for talking while jerilyn blueford speaking
6:03 PM – 18 Sep 12

#oakmtg #justice4alan jerylynn blueford calling out the city for no police report, for alan never having been brought to the hospital at all
6:04 PM – 18 Sep 12

#oakmtg #justice4alan deanna santana says she’s in the process of getting the police report now . alan was murdered in may . it’s september
6:17 PM – 18 Sep 12

#oakmtg #justice4alan diop calling the problem a structural question, when people of color are being murdered by police every day
6:25 PM – 18 Sep 12

#oakmtg #justice4alan now larry reid is threatening again … this is a house full of people who’ve had enough
6:28 PM – 18 Sep 12

#oakmtg #justice4alan cephus johnson calling out the city for not addressing the fact that miguel masso lied about the murder of alan
6:44 PM – 18 Sep 12

#oakmtg #justice4alan ingrid martin trying to give her time to cynthia morse, larry reid says no and calls a recess
7:17 PM – 18 Sep 12

#oakmtg #justice4alan that last tweet should’ve been sent out twenty or more minutes ago, and we’re still in ‘recess’
7:18 PM – 18 Sep 12

#oakmtg #justice4alan they’re shutting down the meeting . followed larry to the hiding room, where i saw jordan hiding
7:39 PM – 18 Sep 12