A report has surfaced about the failure of a grand jury to indict a Texas man who shot and killed a police officer in self-defense, as police arrived unannounced and proceeded to execute a warrant for marijuana.  Without police showing the warrant or even properly announcing themselves, Hank Magee thought he was being burglarized.  In self-defense, he grabbed a gun and fired at the intruders, killing one officer.

Julie Renken, the district attorney for Burleson County, said in a statement Thursday she thought the sheriff’s office acted correctly during events that “occurred in a matter of seconds amongst chaos.”

“I believe the evidence also shows that an announcement was made,” Renken said. “However, there is not enough evidence that Mr. Magee knew that day that Peace Officers were entering his home.”

Julie Renken contradicts herself.  According to her, ‘in a matter of seconds among chaos … peace officers …’  managed to properly identify themselves and make certain the people in the home did not believe they were about to be robbed or murdered.  Her use of the phrase ‘acted correctly’ is a value judgement not based in reality.  She states ‘an announcement was made’ while also stating that the whole incident occurred ‘in a matter of seconds.’  She acknowledges that there is not evidence that Hank McGee understood that it was police officers coming into his house, even if ‘an announcement was made’ by police.  ‘A matter of seconds’ is not enough time for occupants of a home to process such an announcement.  She fails to acknowledge that it was police who created the chaos which ensued.

By definition, police breaking into a home within seconds of arriving does not allow adequate time for the occupants to become fully aware that it is police entering.  This is especially true when police choose to serve these warrants in the dead of night, while occupants are asleep.  Even if police leave enough time for occupants to recognize them as police, they are still required, in almost every circumstance, to show proof that police have the right to enter.  There are many cases in which police enter property without a warrant.  Making an announcement of their presence, in such a situation, would still not protect police from being shot by an occupant in self-defense.  Police have a responsibility, in almost all cases, to present occupants with proof of a warrant before attempting to enter.  It is the task of judges to refrain from granting ‘no-knock warrants’ for low level drug or other offenses, and especially when the search is for a naturally occurring plant. Any harm to police who enter without showing a warrant, even if they have one, is considered by law to be self-defense on the part of the occupant.

A question the people need to ask and answer is whether police will be held accountable to assure that those whose homes they enter are aware and acknowledging that it is police entering, or whether police can claim they screamed ‘POLICE !!!’ while breaking through someone’s door (often without a warrant, though in this case they seemingly had one), and thereby be safe from harm from an occupant defending themselves against obviously armed intruders.  If people allow this to be the status quo, any armed intruder can keep themselves safe and insure a successful robbery by simply yelling ‘POLICE!!!’ as they break into the residence.

Police are not safe when entering a home without properly identifying themselves and giving adequate time for the occupants to respond and acknowledge that they understand it is police at the door.  Given that people have the right to self-defense, any officer entering a person’s home without showing a warrant and getting acknowledgement from the occupants that they understand it is police entering will have to live with or die as the consequence of threatening the safety of occupants.

The real story now, though, is the thread of comments under the article.  Here are a series of screenshots, with comments showing in reverse order as they do on the site.  While some law enforcement personnel do understand the right to self-defense, others deem the shooter at fault for the death of a comrade, even though the raid was conducted in an unsafe and illegal manner, giving the occupant every reason to defend himself and his family.

The PoliceOne site attempts to restrict engagement to those who work in law enforcement. 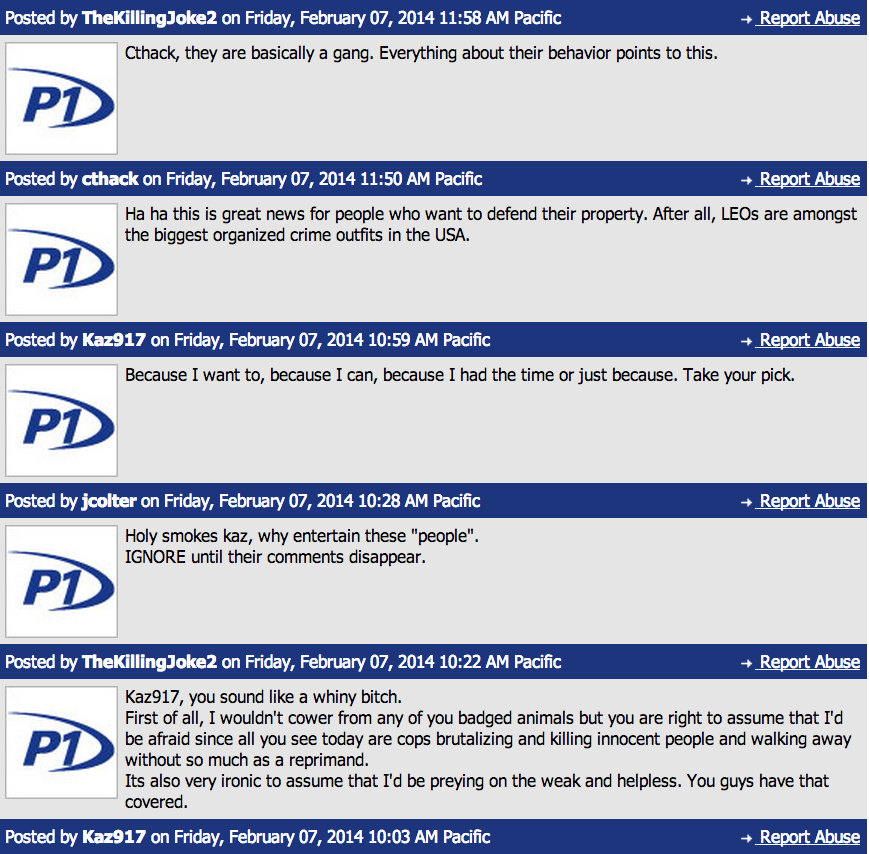 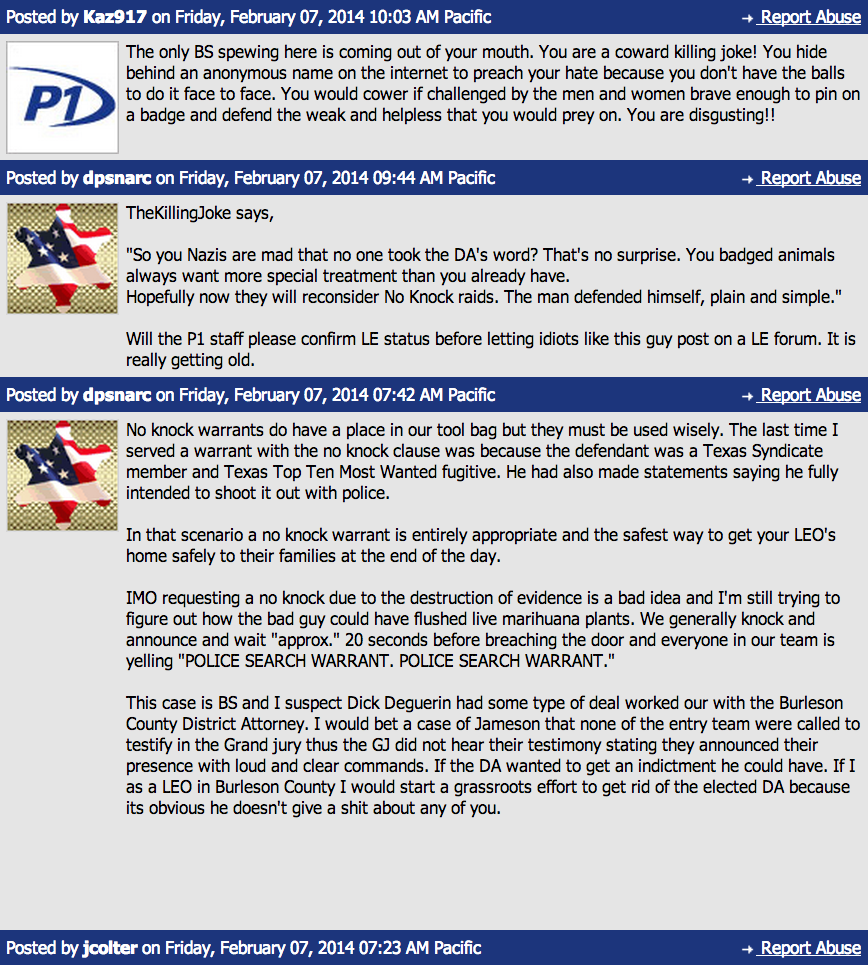 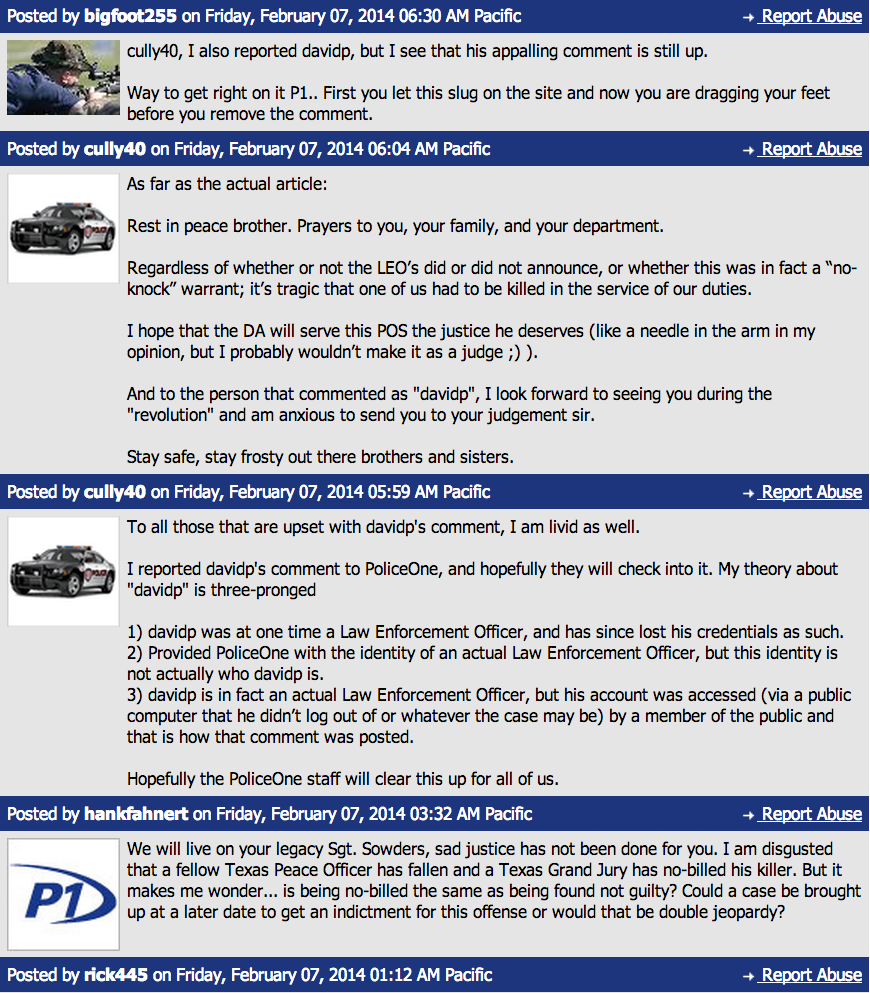 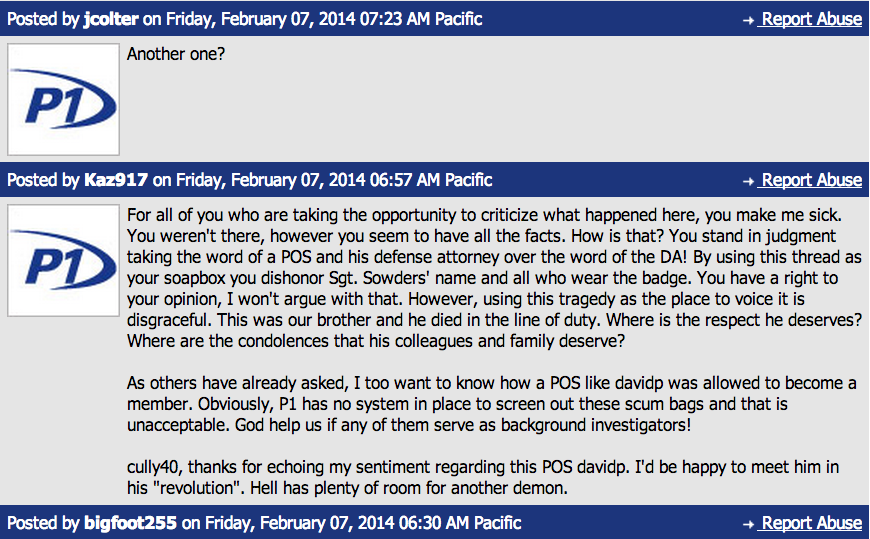 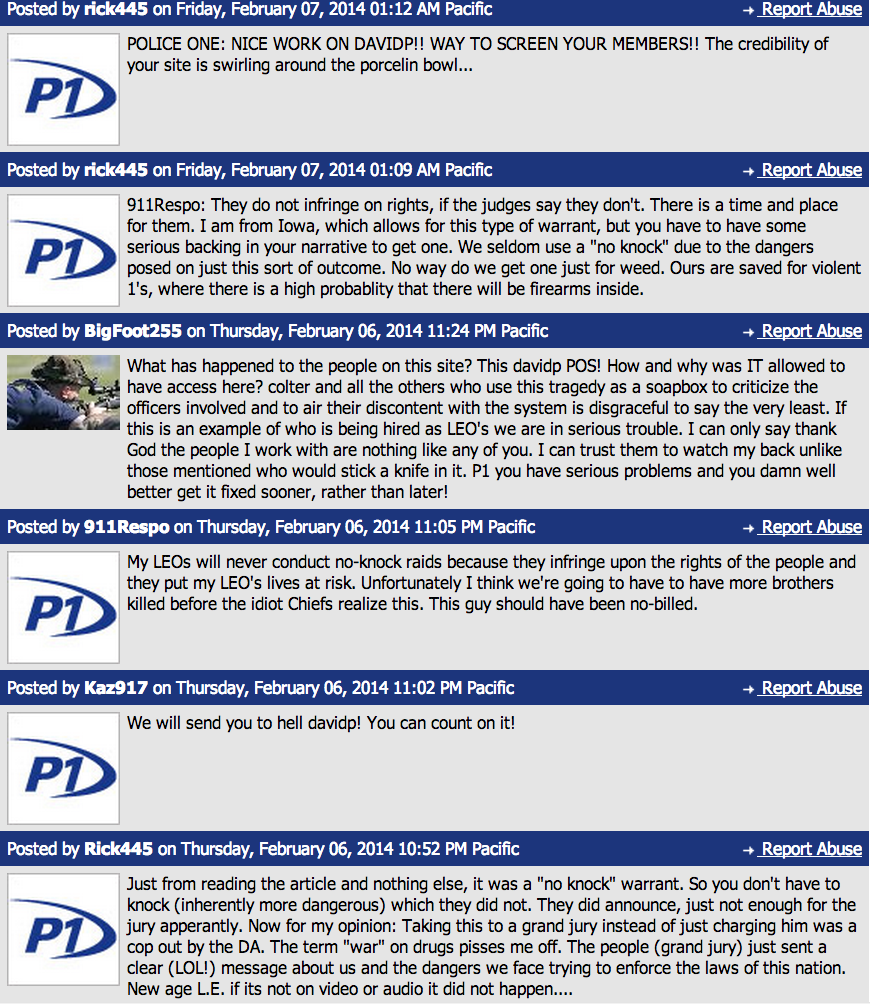 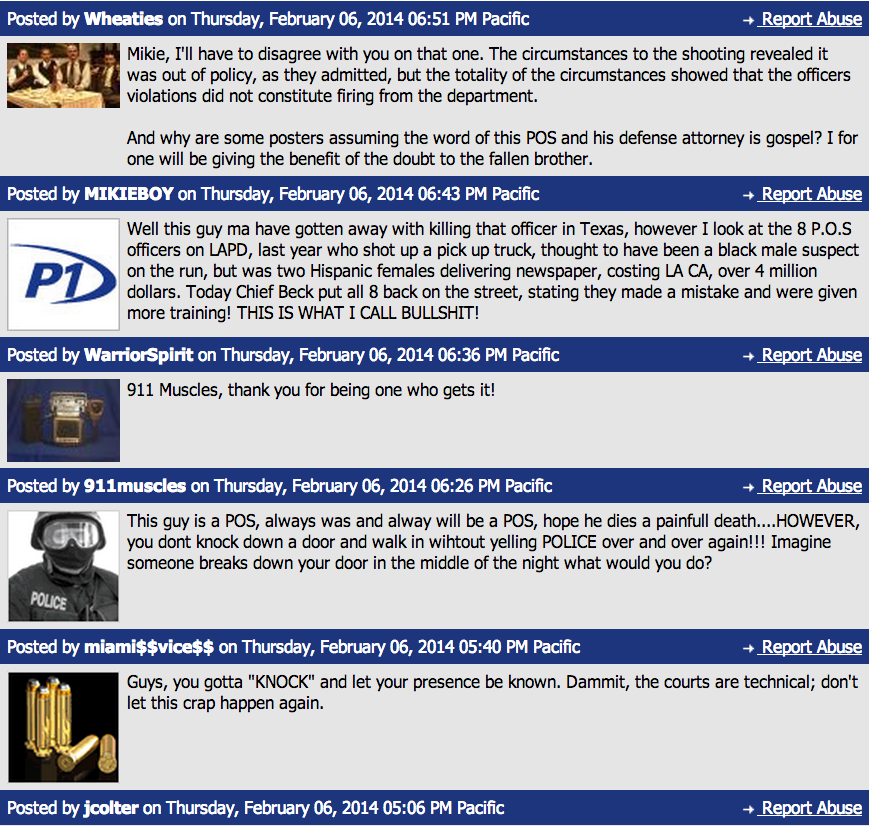 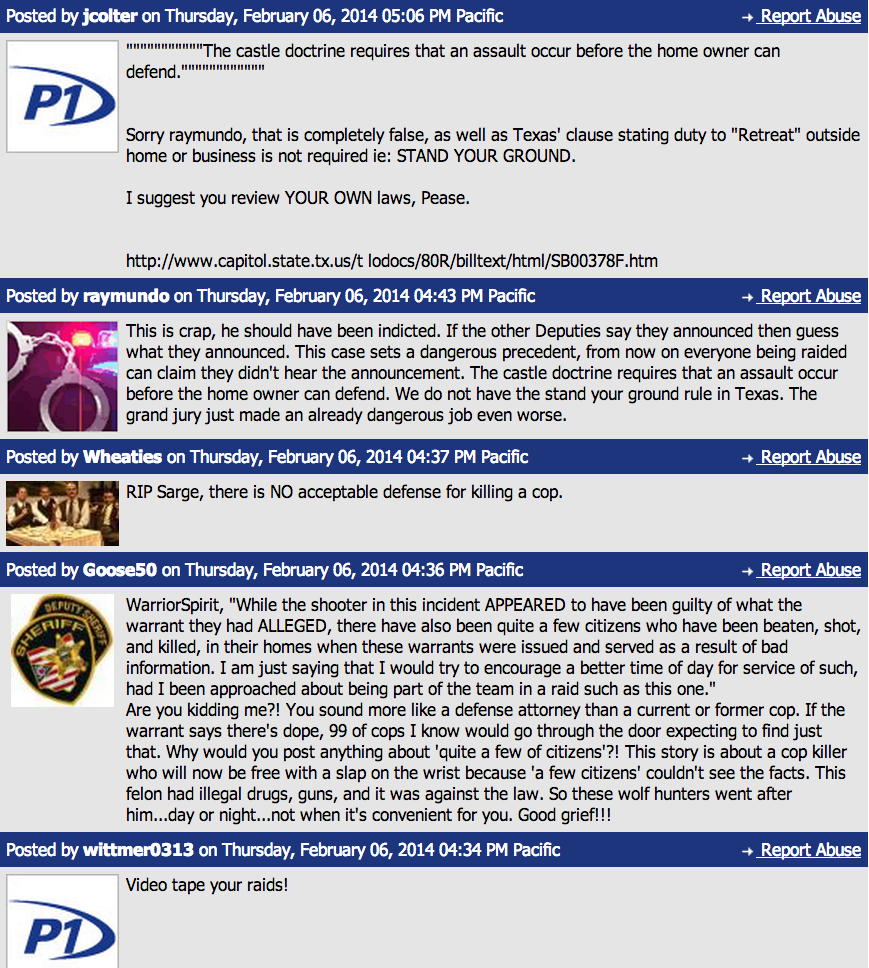 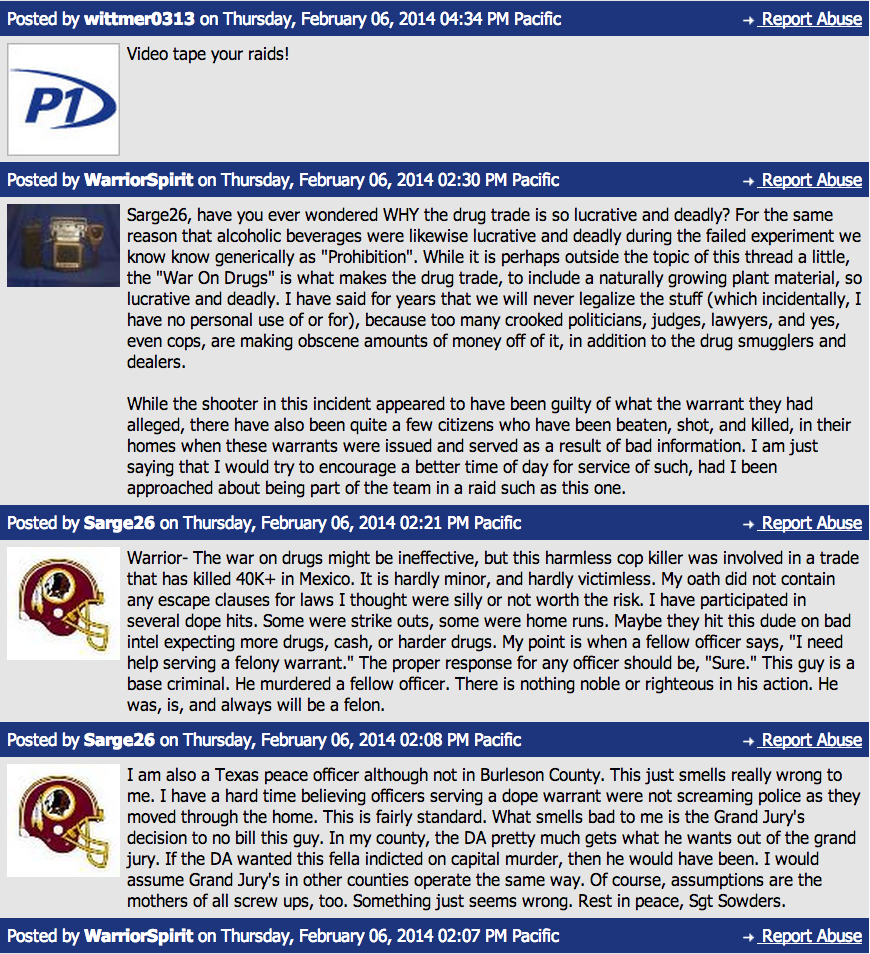 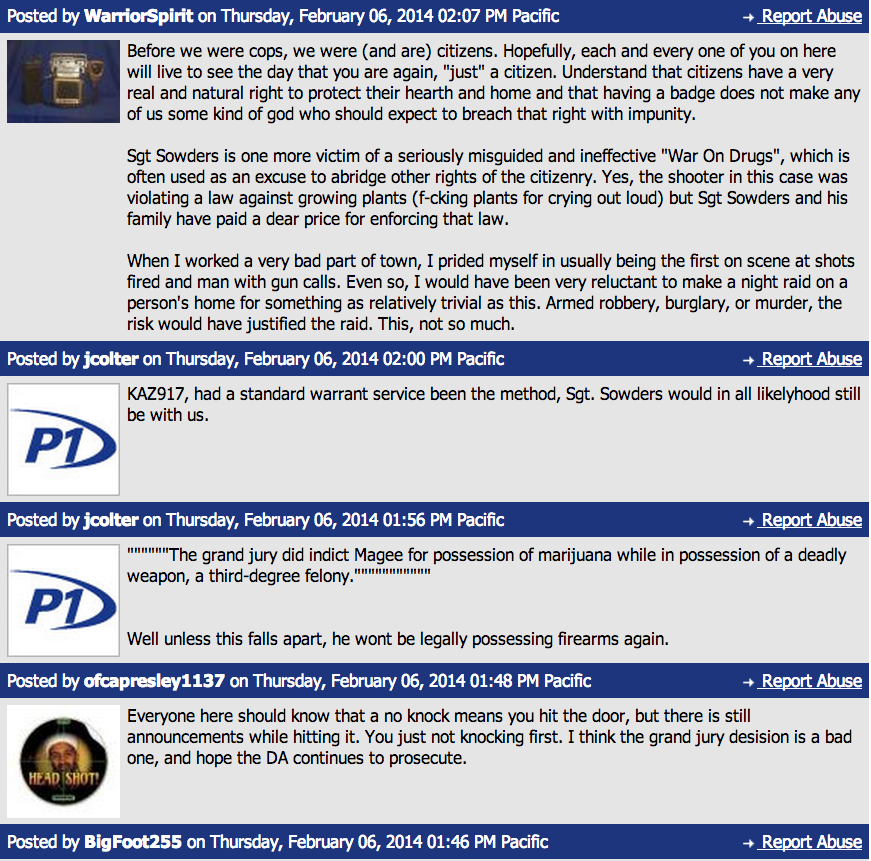 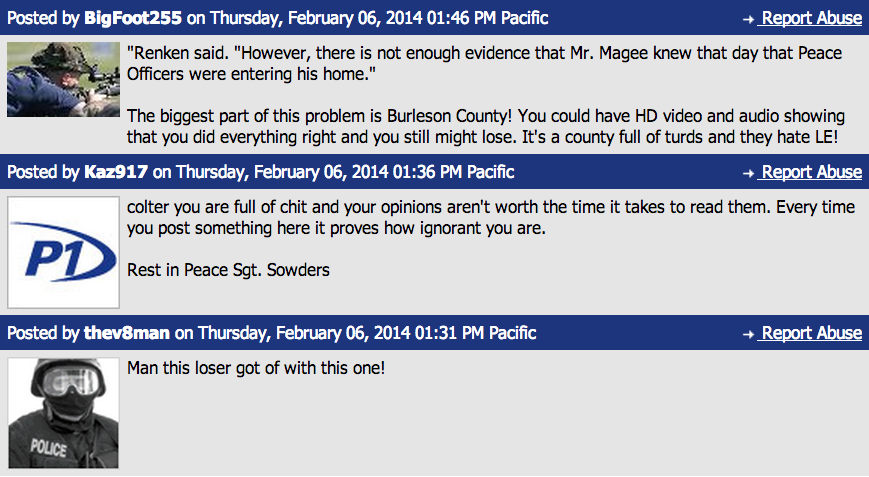 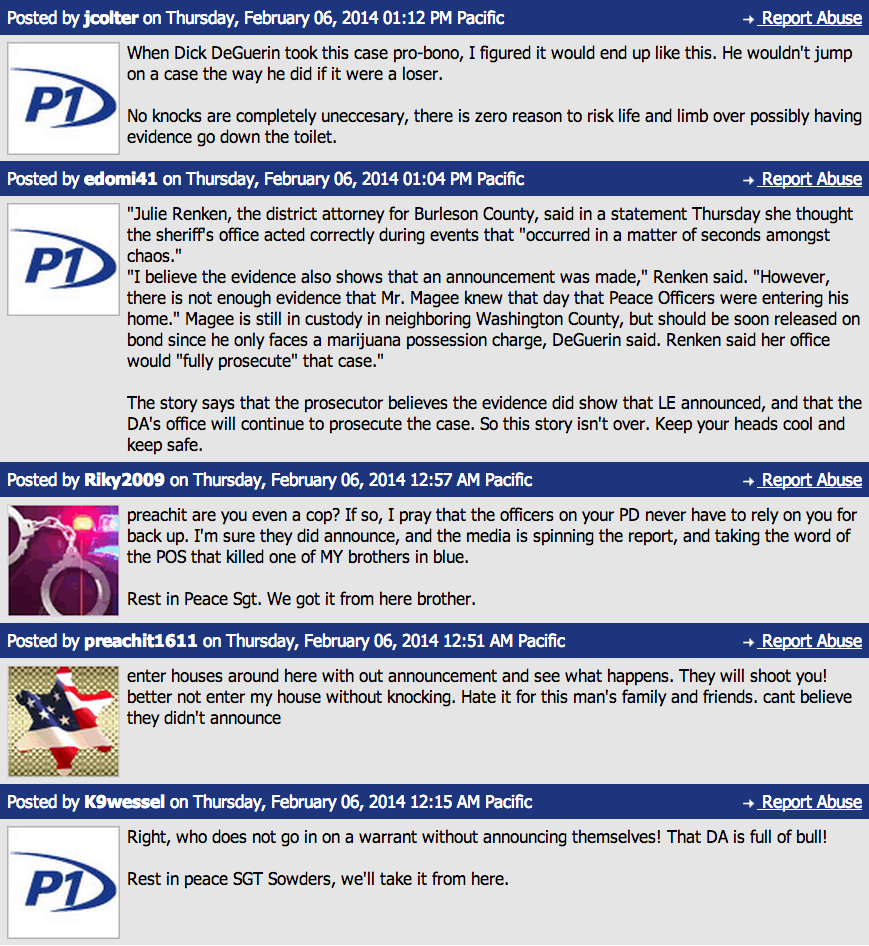 While there is plenty of banter confirming that many, if not most leos would prefer to bypass the courts and deliver their version of justice to the shooter in a case like this, there are several comments here which reveal that there still are thoughtful, law abiding leos who recognize abuses of law by police, and support peoples’ right to self-defense.  This comment by jcolter :

KAZ917, had a standard warrant service been the method, Sgt. Sowders would in all likelyhood still be with us.

My LEOs will never conduct no-knock raids because they infringe upon the rights of the people and they put my LEO’s lives at risk. Unfortunately I think we’re going to have to have more brothers killed before the idiot Chiefs realize this. This guy should have been no-billed.

show some depth of understanding of constitutional law by two self-proclaimed leos.  Of course we also see evidence, in this thread, of the inability of the PoliceOne site to restrict commentary to those in law enforcement.  It seems likely that some of these comments were posted by non-leo activists who are working against outrageous uses of force by police.

Readers might consider the value of having access to the inner workings of the minds of law enforcement officers, many of whom believe there is no legitimate reason a person would have the right to protect themselves from a police officer.  The PoliceOne site is one place to peer into that collective mind of the largest gang in the country.