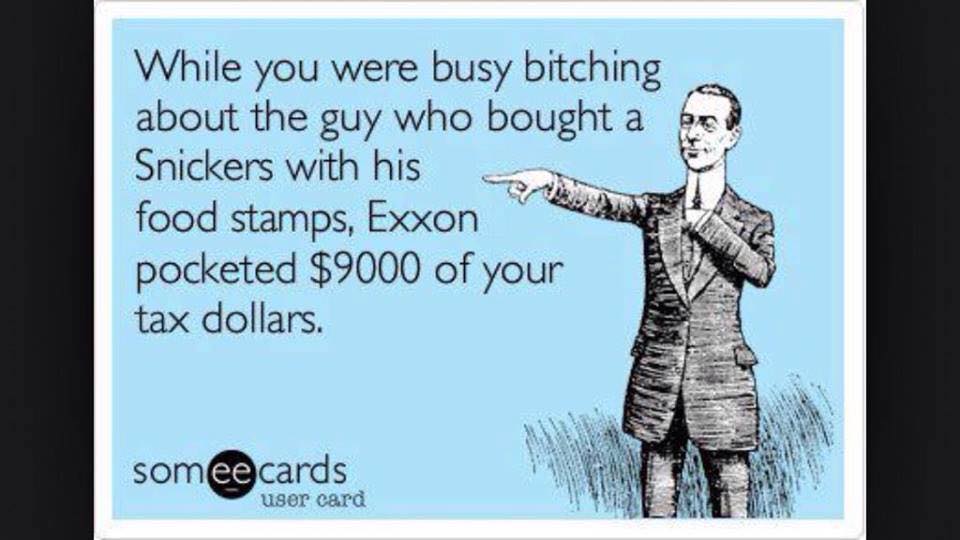 In a room on fedbook called Master Debaters, this person started a thread complaining about what someone purchases with food stamps … she or the admins deleted the thread. This publisher is guessing the original poster deleted the original post after being mightily slammed for her opinions.

Feel free to continue the conversation by creating a user id and engaging here in comments, or by exchanging ideas wherever this article is posted. 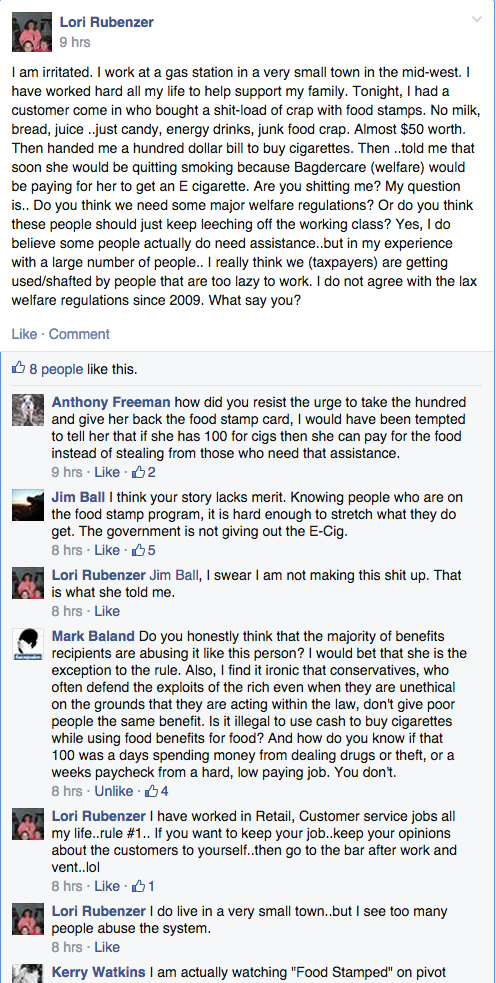 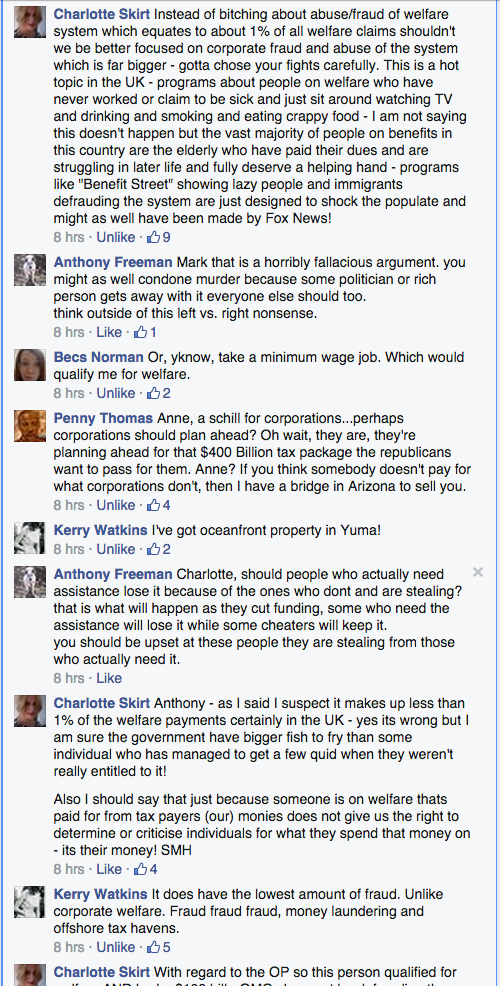 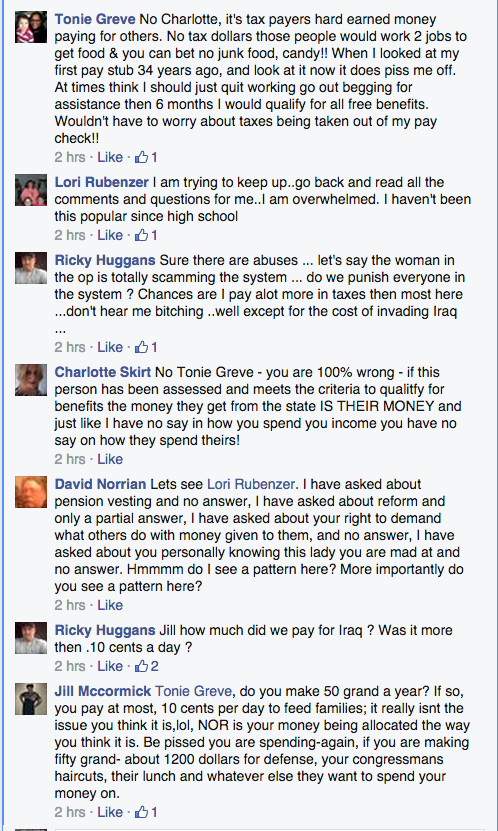 The gap here is caused by facebook not posting comments as they occur, and by the reader having not opened a new tab full of this thread of insanity before somebody (the original poster) deleted the whole thread. 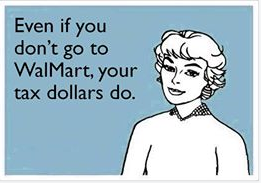 In place of these words, there may eventually be a list of links … links which were included in the thread, but do are not clickable because … screenshots …

Below an article (posted by Amanda Marcotte), about the deceit being published on an anti-choice website, are these comments :::

Its sucks to be a woman, gay, black, poor, working class, hispanic, islamic, jewish in the us today. What a lovely nation im so proud!!!

Yeah, everybody is a “victim” under the leftists rule of today. Everybody but the dead baby the mother had killed with an abortion because he wasn’t “convenient.”

Typical pro life advocate. You are all huge hypocrites. I will consider making a fetus a citizen but all laws now apply to the fetus. Any and all chemicals that harm the fetus is now outlawed. This includes but not limited too: nuclear reactors, coal burning, all pesticides, herbicides, fungicide, hydrylic fracturing, disposal wells; all plastic is now outlawed; rape with pregnancy is now the death penalty; any mother that damages the fetus with substances, even if she doesn’t know she is pregnant, is now murder one. We must reduce fossil fuels by 60 percent to curb chemicals. I could go on. Bunch of hypocites. Go be a good sheeple!

Pregnancy is a minor inconvenience eh?

Well then, you shouldn’t complain if anyone FORCIBLY does the following to you, in order to save a life:

Normal, frequent or expectable temporary side effects of pregnancy:

altered appetite and senses of taste and smell

mild to severe backache and strain

difficulty sleeping, and discomfort while sleeping

curtailment of ability to participate in some sports and activities

infection including from serious and potentially fatal disease

(pregnant women are immune suppressed compared with non-pregnant women, and are more susceptible to fungal and certain other diseases)

continued post-partum exhaustion and recovery period (exacerbated if a c-section — major surgery — is required, sometimes taking up to a full year to fully recover)

Normal, expectable, or frequent PERMANENT side effects of pregnancy:

pelvic floor disorder (occurring in as many as 35% of middle-aged former child-bearers and 50% of elderly former child-bearers, associated with urinary and rectal incontinence, discomfort and reduced quality of life — aka prolapsed utuerus, the malady sometimes badly fixed by the transvaginal mesh)

scarring from episiotomy or c-section

other permanent aesthetic changes to the body (all of these are downplayed by women, because the culture values youth and beauty)

loss of dental and bone calcium (cavities and osteoporosis)

newer research indicates microchimeric cells, other bi-directional exchanges of DNA, chromosomes, and other bodily material between fetus and mother (including with “unrelated” gestational surrogates)

Occasional complications and side effects:

temporary and permanent injury to back

dropped (prolapsed) uterus (especially after additional pregnancies, and other pelvic floor weaknesses — 11% of women, including cystocele, rectocele, and enterocele)

pre-eclampsia (edema and hypertension, the most common complication of pregnancy, associated
with eclampsia, and affecting 7 – 10% of pregnancies)

anemia (which can be life-threatening)

hemorrhage and numerous other complications of delivery

aggravation of pre-pregnancy diseases and conditions (e.g. epilepsy is present in .5% of pregnant women, and the pregnancy alters drug metabolism and treatment prospects all the while it increases the number and frequency of seizures)