This report was obtained and published by Da Lin of KPIX

From the man who said “Quite frankly, I’m always in favor of more cops”

From that same article : ‘Bratton again defended stop-and-frisk, which he said all police departments do to varying degrees. He said the term should be called “stop, question and frisk,” because most police stops end with a question and never result in suspects being searched.

In this interview at 2:27, Bill Bratton reveals a past clarity he has since abandoned.

There was a belief that crime was caused by things that were beyond the influence of the police, such as poverty, demographics … lotta young people … uh, the economy, uh, race issues, ethnic issues, ah the weather, ah … and we believed them.

He seems to have had, at one time, a real grasp on the actual root causes of crime. He goes on to dismiss those as causes.

Two months ago Bratton again appeared in a video interview, grabbing the spotlight to opine about gun control, and to praise and defend the stop & frisk policy, which he does after the question is posed at 4:01. First, they joke about him calling it ‘stop, question, & frisk’ … as if questioning someone for walking while black is better than frisking them for the same ‘suspicious’ behavior. He contradicts himself all in one sentence, then bumbles on.

It is a constitutionally protected activity by police. The challenge for police is to do it legally, compassionately, consistently. Not just in poor neighborhoods, not just in minority neighborhoods. And that is the issue, unfortunately, around the country because that is where it’s most frequently because unfortunately that is where the majority of crime, both serious and minor, it is committed. That’s the reality of our lives, our society. It is an essential tool of policing. Can police be better trained, supervised and monitored, I think they can. Uhh, but those that are advocating that it be done away with or representing that it can be done away with it, I’m sorry but you do away with it and, uh, you’re going to have cities overrun with crime because it is the basic tool that every police department in Amerikkka uses.

One has to wonder, if he was hired as ‘consultant’ by the city of Oakland for $250,000 for a four month stint, why he was being interviewed via videophone from New York, in the middle of his four month assignment.

Bratton goes on to say he won’t respond to something because he hasn’t yet been to Oakland. This interview was published on 22 February 2013. If he hadn’t been to Oakland by that date, how has he managed to deliver this report in less than seven weeks?

He finishes his comments by saying, “This stuff is not rocket science.”

If that is the case, why is Oakland paying $250,000 for some weeks of his time, just after many layoffs and whilst still in the midst of budget woes?

Howard Jordan’s response to these recent developments is to quit his job and try to call it medical retirement.

On Monday, January 21, 2013, at approximately 4:30 p.m.,Chairman Fred Hampton Jr., son of slain deputy chairman Fred Hampton Sr. of the Illinois Black Panther Party, as well as three additional passengers, fell victim to the abuse and harassment many Black and Brown Oaklanders experience on a regular basis.

After leaving the Berkeley marina, the group noticed a police car following them in route to the Emeryville Target shopping store. As they pulled into the packed parking lot, they were immediately surrounded by seven police cars from Oakland and Emeryville. Officers, with guns drawn, proceeded to give the following conflicting orders to the driver: “Don’t move, put your hands up, roll the windows down, open at the door and turn off the car.”

The passengers, were aggressively told by the police to not look backward; not to look directly at them, but step out of the car with hands in the air. The passengers exited at gunpoint, one by one. Two women were placed in separate police vehicles, while Hampton and the other male passenger were told to remain standing outside in handcuffs.

A female passenger and mother of three small children was handled so roughly by officers that she had to be taken to Alta Bates Summit Medical Center (after being detained by police for over 3 hours) for treatment of a severely twisted arm recently diagnosed by emergency room physicians as a torn ACL. “There were so many police and police cars; they wouldn’t even let the shoppers leaving the store get in their cars.” Hampton stated.

Officer Kittrell M. Carter, badge #758, serial #8702, asked Hampton, “You got your I.D.? A handcuffed Hampton informed the officer that his I.D. was in his back pocket. As the policeman reached for the wallet he asked Hampton, “Are you still in Chicago at same address? The Chairman was stunned by the officer’s pre-existing knowledge of his identity and residence before the actual identification was viewed.

When asked what was going on, the group was told by an officer that they were responding to a report of a stolen cell phone, though none of the detainee’s several ringing cell phones were confiscated by police on the scene. It’s like going to the scene of a child endangerment and NOT checking on the child.

After being held in handcuffs in the Target parking lot for over three hours, a separate police car arrived and each detainee, except Hampton, was ordered in front of the vehicle’s floodlight. Sergeant J. Thompson, badge #8238 then told officers to uncuff the four people and the police began to leave. When Hampton and others demanded an explanation for the fiasco as well as the names of officers and complaint forms, he was told that a robbery had occurred and a cell phone that was stolen was tracked to the Target parking lot. An unknown victim who supposedly arrived in the latest police vehicle said that none of the detainee’s were involved in alleged incident.

All of this follows a recent appearance by Hampton at the City of Oakland public safety committee meeting last Tuesday, January 15th where Hampton spoke in opposition to the hiring of “supercop” William Bratton, who is known for his authorization of unconstitutional policing, the kind of which the Hampton family is painfully all too familiar.

Hampton’s impassioned speech was punctuated by applause when at the end of his 2 minute open forum comment, he claimed to have received ceded time from Oscar Grant and Alan Blueford who Hampton stated, “are not able to be here to speak for themselves”. This fraudulent and random stop by local law enforcement is also only one day before the full city council meeting when Bratton’s contract is slated to be voted on by city officials.

This harassment of Fred Hampton Jr. is, in essence, an attack on the work being done to stop the Bratton contract. The name recognition of Fred Hampton brings significant attention to the issue of unlawful, demeaning policing on communities of color.

It is imperative that we reach out to neighbors, co-workers, comrades, and everyone who will listen to remind them that an injustice to one is an injustice to all; we must work to ensure all rights are protected.

If you can, attend the City Council Meeting today, January 22nd at 6:00 pm. Come very early to get a seat, fill out speaker cards, and let Council know that intimidation tactics and apartheid-like policing will not be tolerated in Oakland!

All of the speakers in the video from city hall special meeting of public safety committee on Tuesday 15 January 2013, are worth hearing. Fred Hampton Jr. speaks at 2:48:40. 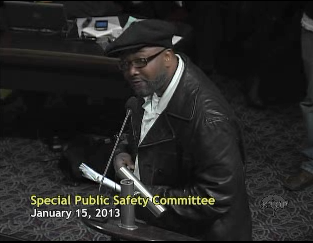 an error has removed video
photographs by wiseoldsnail